So I did what all great climbers do when they’re running short on money: I quit my job.

“Anything else lined up?” everyone asks.

Ok, so I left on far better terms than this, and I was able to pee whenever I wanted, but I just couldn't not use this.

So I take solace in the typical things people take solace in during times of unemployment.  Mostly, “at least I’m not some poor child in Mauritania,” and “if those people at the Red can live on $100 a month, I can handle this!”

The solace doesn’t last long.  What if I don’t want to loot through Miguel’s dirtbagger/left-behind/freegan box for the half empty jar of pesto?  What if I like my 4G cell plan, my Grindr Xtra, my pork butt?  I don’t wanna be a copy writer for an SEO contractor!  I’m too pretty to depend on winning ABS Nationals to have enough gas money to get me to the next box of half-empty pesto!  I can’t even win ABS Nationals!  The Gay Games aren’t until like 2014, they probably aren’t awarding money, climbing probably won’t be included, and Mikey or Timmy might show up!  And then I’d be stuck in Cleveland, whose only idea of a tourist attraction is the Gay Games!  Maybe Cleveland’s great, I’ve never been.  But I’m too old to get back on the pole!

So, to avoid the search for a new job, I’ve been devoting myself to the great distractions of reworking the Homo Climbtastic web site and planning for the next convention.  This, however, brings its own frustrations.

First, planning the conventions involves a lot of talking to potential attendees, and if there’s one rule of talking to potential attendees, it’s that the more they want to talk to you, the exponentially less likely they are to actually come.  Second rule is that somehow, someway, the HC web site or facebook group or our reputation or something does a magical job of scaring away the “masc dudes seeking other st8 acting guys to just chill with”.  It’s an amazing phenomenon, but also poorly understood.  You probably wonder how it is that the people who show up are who they are, and somehow there’s a certain element missing.  Where did they go?

Well, usually, the conversation loosely follows them asking me if there are attractive masculine guys there, and me saying,

“yes, but if that’s the only reason you’re coming, the people there will probably laugh at you, crush your projects, and joke about rubbing their groins down with chalk and teabagging you.  and that’s just the women.”  (i would use the phrase “cis women”, but they just get confused and i don’t feel like explaining it.)

and then it’s something about how they’re really better at kayaking or fishing or monster truck rallying or whatever but they just bought one of those hand squeezey things at the athletic store and they think if they use it everyday they totally might be totally able to go, cause, you know, that’s all that’s holding them back from 5.10, their lack of resolve to use that little hand squeezy thing on a more regular basis. 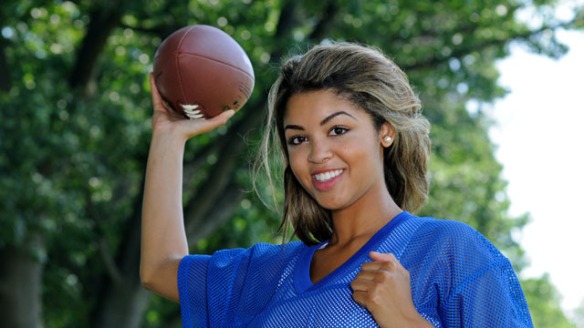 First I'm gonna teabag you, then I'm gonna spike this football into your nuts!

so after the brief thought that i’ll never get that hour of my life back, i turn to trying to improve this free-ish wordpress web site, which led to the recent concern on the Homo Climbtastic Facebook comment boards about me boldly removing the page devoted to photos of hot shirtless climbers in HC.

Anyfuck (I’m co-opting Kelly’s phrase) I know I’m being hypocritical, cause I know I go to Lah Fitness and do my little roman chair exercises and crunches on the inflatable ball and such, but it’s just that sometimes, when I see pictures advertising gay sporting whatever…

I've been waiting for the moment I could break out the poses that don't need one hand to hold the iphone! And yeah I'd fuck the one in the middle too. Sue me.

I’m not saying that I don’t want to be able to walk into the mall and see Rafael Nadal in his underwear and stop in front of the poster for about five minutes having a mind wank, in fact, I think that’s exactly how I want it to remain.  What I want to forestall is the homo world’s trending into this strange territory where gay men keep seeking and getting modeling gigs, getting paid minimum wage, and listing their Facebook occupation as “model” because some creepster photographed them all day for about 5% of what a stripper would make if they kept the g-string on.  Someone needs to step in and tell these poor children on the ab machines that the only way to make money simply by being a good looking man (after discounting the cost of roids and the gym membership) is by either working the pole or selling real estate.  And the market for real estate is not rebounding, if these emails I keep getting from my agents about how it’s definitely rebounding are any indication.

I suppose I could be swayed if Timmy took some photos that were so provocative that I just couldn’t not post them.

Apologies to those who’ve only known me since 2011–seems I haven’t been myself, and I’m sorry for only letting you experience the docile simulacrum. (I should have taken the absence of haters as a warning sign!)  It just took me a hot minute to remember how to chalk my groin.  Welcome to 2012, mother fuckers!

Maura and Craig of Water Stone Outfitters produced their very own video about Homo Climbtastic’s convention and YOUR equipment needs for sloppy wet West Virginia.  Maura introduces this year’s convention as the year of the climbing gal, so check it out, and note that she’s giving us HC members a 20% discount on helmets–you know, that thing that we insist all of you own so you don’t get your head knocked in by rocks.

Craig also takes off his pants at 4 minutes in, and as Maura notes, they’re giving prizes to the people with the best fuzzy costumes.

Get psyched for the HC convention!

todays trip report requires a bit of discretion.  the place we went to has what the climbing community coyly refers to as “access issues,” so there is an understanding among the people who climb there that we not discuss where it is, how to get there, and so on.  because there are a lot of routes, the benefit is that you can climb there on a sunday, get on a bunch of classics, and not see a single goddamn person.  but the main benefit of no crowds is not, as you might guess, the ability to get on popular routes without waiting.  no, the real benefit is that you can climb naked. as pictured here.

ok, so we didnt really climb naked, and this picture was taken purely for the blog.  which may have made heterosexual cohort zach uncomfortable, although i couldn’t truthfully tell him that our trips weren’t normally like this. 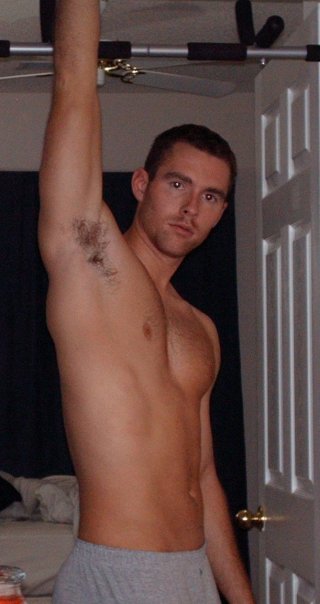 Heterosexual cohort Zach. I'm not sure why we didn't have any pictures of him shirtless at the crag, but maybe Matt didn't want to give him the impression that we were perving. Which we were.

although not naked, i did in reality spend the entire day in underwear, flip flops, sunglasses, and a helmet.  the south is hot y’all! 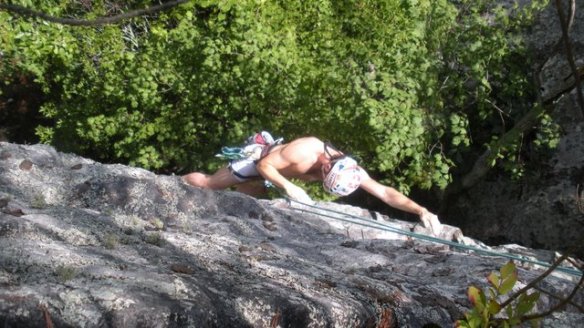 If you saw how far up that second bolt was, you'd have top roped that shit too

given that i cant publicly disclose even what state it’s in, me and laurie decided to refer to this climbing area in the open as as The Super Secret Place.

Laurie, on the other hand, Just Says No to top roping. And says yes to sexy back.

even among the regulars, people dont know the name or the grade of 3/4 of the routes there. fortunately, we had the most recent revision of the bootleg topo for the area, which you too can obtain if you’re willing to forgo your sexual orientation for a few hours.  (Editor: Does it really take that long to fuck (redacted)?  Me:  Yes!  You only wish you could have.  And you can’t print that name here.)  suffice it to say, the dixie dyno’mos will stop at nothing to get a bootleg topo.  but dont ask us for it, because we think that’s a right of passage everyone should experience.  certainly better than whatever was involved in joining your fraternity, if only because we have the dignity to skip the cracker and admit that the paddling was enjoyable.

The downside of the area is the occasionally spartan bolting (better than no bolting) which demands creative stick clipping and sideways mammer-jammering.  So half the time we climbed anything we were tied into another rope and swinging around to clip the next route over.  Still, despite the heat, and the spiders, and the mammer jammering, the route quality is stellar and the grades challenging.  The latter probably explains why someone abandoned this pair of (Redacted) brand climbing shoes at the base. 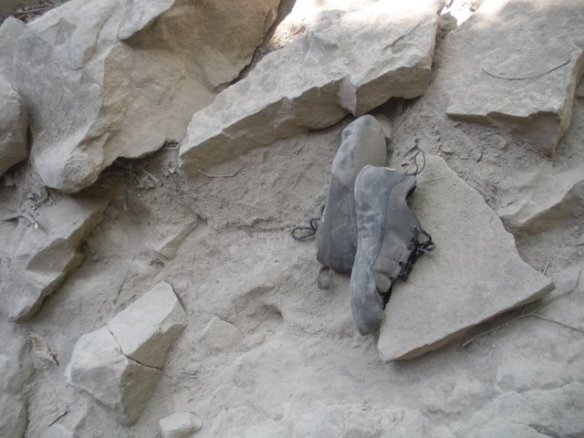 Looking for a good home

Matt said, “Maybe you shouldn’t badmouth (Redacted) in case they decide to sponsor us?”

“If that happens, I’ll just delete all the references to (Redacted), and help them come up with a new ad campaign.  I can see it now.  (Redacted): Better than Montrails!”

“Maybe if they give us free shoes they’ll just spray paint their logo over a pair of good shoes like they did with (Redacted Redacted).”

Check out those guns

On the way home, we passed a sign next to a gas station that said “boiled peanuts”.

Thumbs up for the bottom sign, not the top one

NOT TRUE.  Those peanuts were hardly boiled, and if I was driving, I would have turned that car right around and chucked that styrofoam cup hard enough to blot out at least the second half of “American”.

Also, I demand to know what the hell the female equivalent of “Extenze” they were selling is supposed to do.

with the trip just about over, i thought about my goal that morning, which was basically to find a place with bolts with no more than two hours of thorny bushwhacking, and to waypoint the shit out of everything on my GPS.  after we left, i was sad i didn’t have more time to get on harder routes, so it was kind of funny that we debated going to sandrock instead the morning of.  so, moral of that story, if your group is five or less, grab that motherfucking machete and move toward the abyss.

We're a blog, we have a Facebook group, and our pièce de résistance is the world's largest queer climbing convention, held annually in July in Fayetteville, West Virginia.

To meet people even weirder than you are, join the discussion on Facebook.