So I was talking with my boyfriend Craig a few hours ago, and I said,

“I’m going to this climbing fundraiser tonight, and you should know that Chris Sharma is going to be there, and he’s on my list of celebrities that I’m allowed to sleep with.”

“No. But if it turns out that him and his wife want to get stoned and do some freaky shit in a van in the parking lot, I’m gonna just roll with it.”

“Timothy Olyphant. We each get a total of six.”

So I drove over to the climbing gym and got in the Chris Sharma autograph line. I told him that I wrote for humorous climbing blog and would need a humorous pose for the photo, and showed him the classic HomoClimbtastic “Tiger Pose”, which he did his best to emulate:

I also met Brady Robinson, the Executive Director of the Access Fund, and Zachary Lesch-Huie, AF’s Southeast Regional Director. I had talked with Brady a few days prior about the Valentine’s Day marketing that I had flamed on the blog earlier this week and for which AF later apologized.

Naturally, no one is immune from Tiger Pose, so we did a Tiger Pose photo as well:

We were all in agreement that the best way forward to smooth over the whole heterosexist AF sticker brouhaha from earlier in the week was for HomoClimbtastic to take the Access Fund vector file, and rework it, as HC members suggested, so that the text would remain “I Love You Man (Platonically of Course)” but the image behind it would be of two men in a passionate, homosexual embrace, and that we could sell the new stickers as an Access Fund benefit. Because when it comes to marketing risks, it’s go big or go home. So you can look forward to a special new Access Fund sticker design, come July, assuming Jon Kerwin knows how to use Illustrator. Now there’s something for your climbing helmet!

Also it turned out that Zachary was at the 2012 HC auction and had no idea who I was, despite me emceeing part of it, but he did remember Porsche Ferrari, although to be fair, I’m probably less memorable than Porsche Ferrari. 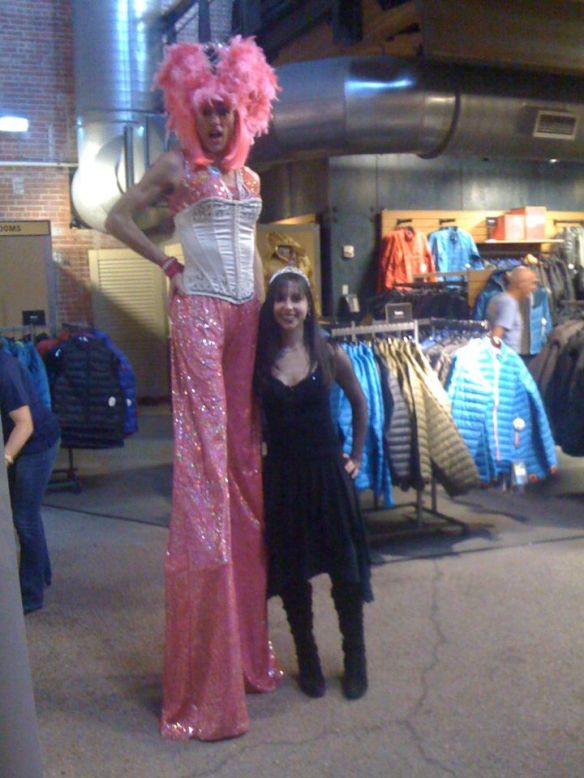 Porsche Ferrari, spotted at REI in the down jackets department

He also remembered Jamie Logan, and Brady commented that he saw her send a 5.13b in the gym the other day. Jamie Logan is also more memorable, half because of the 5.13s, half because of inventing the modern aid hook, maybe also for being more personable.

There was some lawyer talk about how Summersville Lake needs an ingress/egress easement but that’s boring.

We discussed the fact that recently me and Mikey have been at the epicenter of online mega climbing drama. Me, for shaming the Access Fund, and Mikey, for shaming Ivan Greene.

“Basically,” he said, “everyone wants to give you shit for stirring the pot, but it’s aggravating, because they never, ever recommend an alternative. It’s easier for them to just sit back, witness something bad happening, not do anything, and then critique the people who actually try to put a stop to it.”

“I guess the whole thing turns on,” I asked, “because this is what I saw some people commenting online, what attempts had people actually made to get him to stop? Before you published the video?”

“People had confronted him about it, and he always just denied it. And then he was supposedly working a problem with a guy, neither of them could do the problem, although the other guy was close, and then the other guy came back and found the problem had obviously been chipped to make it easier. And then some people staked Ivan out with a video camera for like five hours and shot the video of him chipping. Who knows how much of that is true, we just got the video, which pretty clearly shows him chipping. And we are a news magazine about climbing, so we’re not just going to trash it, and it’s on public property, so it would have been silly to blur his face out.”

“So basically we’re the gadflies of the climbing world.”

I asked my paralegal if he had ever met or seen this Ivan character.

“He’s your basic attention-whore semi-pro climber. He always travels with a posse of New York models.”

“So basically me, except for the semi-pro part.”

And then I ran into Jessa from Petzl, who said she wanted to help sponsor the next HomoClimbtastic auction. So, huzzah, Petzl gear sponsorship for this year!

And that was the Rock and Rave. There was beer there, but nobody around to drive me home so I couldn’t get trashed and climb.

1 thought on “Rock and Rave: I meet Chris Sharma, the directors of the Access Fund, and me and Mikey talk Hurricane Ivan”