Given that I am the designer of the HC logo, which, as you may have noticed, is humping goats, you might suspect, correctly, that I am sensitive to the plight of those who might get caught up in a kind of “politically correct hell” in a world where everyone’s offended by something. As Amanda Marcotte wrote in regard to Nike’s “Gold Digger” t-shirt, a shirt which was attacked by some, shall we say, not so in-touch feminists: 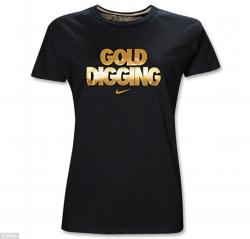 One of Nike’s Olympics shirts.

“The fact of the matter is that if you get any group of people together, some of them will have been at the end of the line when they were handing out senses of humor.”

The Nike t-shirt was an ironic turnabout on the meaning of “gold digger”; in the context of the Olympics, the terribly obvious meaning of the joke was that women were pursuing gold medals in athletics.

Given how obviously simple Nike’s irony was, you can imagine how much shit you get when your jokes are more complex and trample on much more nerve rattling issues.

I am also sensitive to getting booed down because, as people, we are simply not born knowing how or why things are offensive, because unless we’re a member of every distinguishable identity in the entire world, we’re not going to walk into the room knowing how not to be offensive. Is anyone born knowing that “Deaf” has a capital “d” and “blind” is spelled lowercase? Of course not. We learn most of these things by screwing them up and having someone else, hopefully, take the time out of their day to tell us how to do it in the future.

It also will not, or should not, for the reason I just stated, incite white hot rage. We judge these matters more based on what percentage of the population “know better.” There’s a much stronger sense of <facepalm> when Pat Robertson asks his black co-host, “is macaroni and cheese a black thing?” Does it incite rage? No. Is it hilarious? Yes. Is he in on it? No.

Ignorance is just that: ignorance. It doesn’t make you a bad person. It doesn’t make you evil, it doesn’t mean you intended ill against blind, Deaf, macaroni and cheese-eating black people. You just seem out-of-touch, and pardon us if maybe we laugh at you. Plenty of other things can send us into the white-hot-rage zone, e.g. everything else Pat Robertson has ever said.

So with all that framework set up, take a look at the Access Fund’s valentine’s day sticker: 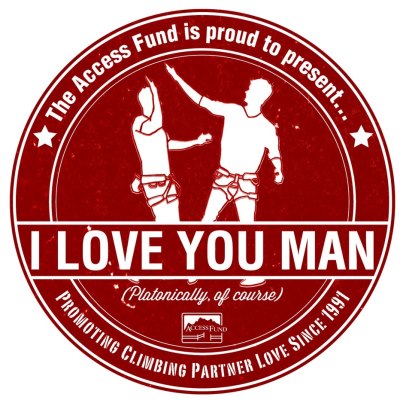 In smallish letters, italicized and in parentheses, it says, “Platonically, of course.”

That “platonically, of course” spawned an accompanying comment thread of critics and defenders, and a response from the Access Fund itself:

Christy’s full comment: I tend to think “I love you, man” is dude-bro-ish enough without adding the equivalent of “no homo” parenthetically below the statement. This statement is insidiously homophobic whether or not it was intentionally homophobic. There is, of course, nothing wrong with platonic love, as stated above, but the reason folks are so afraid of possibly having their intentions misunderstood by someone outside the relationship (because presumably, those within the relationship know what it is and isn’t) is that they don’t want to be mistaken for a homo.

So, let’s take a look at this through our “Nike t-shirt” lens, shall we? When you break the joke down, what does it mean?

Well, when I read it, I see two guys (and in the case of the other sticker, two girls) expressing that they love each other, and the humor of the joke turns on the climbing partners not being misunderstood to be gay. In other words, it’s funny because they’re making it crystal clear that they are not people like me.

There could be a parallel universe where the interpretation applies to all climbing partners (thus inclusive of the platonic boy-girl ones), but you’d have to ignore the fact that this is treading a very worn-down joke made many times before, that absolutely no one would find the other interpretation even remotely humorous, and that the only two stickers are boy-boy and girl-girl. Sorry Access Fund, but I see your explanation, and I raise you the reality that you’re re-imagining history. And the present. (Please don’t screw this up further by creating a boy-girl sticker.)

Now, I know that we all love the Access Fund, and we don’t want to think they can ever do any wrong, but let me just put it as straight to you as I can: we don’t like this joke. We encounter it on a very frequent basis. It wasn’t funny the first time. We know that it’s very funny to straight people, because you don’t want to be mistaken for gay, and thus joking about not wanting to be mistaken for gay is funny to you, but it’s very not funny for us.

Even if you follow the joke up with (as it often is) a “not that there’s anything wrong with being gay,” it doesn’t take the edge off, because even if the message isn’t that you personally would be ok with getting mistaken for gay, you’re still casually grinding salt into the wound that it’s something most straight people are afraid of, probably because the risks of it still include massive social alienation and murder. It was a jailable offense when I was in college, and it’s now illegal for me to get married, so… maybe my emotions on this subject are still a little raw.

Does this go any distance to explain to you why we DON’T want this sticker showing up in climbing gyms and on crag guard rails and climber car bumpers the world over, constantly reminding us that people don’t want to be mistaken for us, because heavens, maybe they would have to confront part of the alienation you get from ACTUALLY BEING US?

Access Fund answers with a rote “no offense intended” non-response response. The sine qua non of being ignorant is that you didn’t intend anything. You were ignorant–of course you didn’t intend it to be offensive.

The only thing you can do, at that point, is attempt to defend some alternative interpretation (say, if I were utterly off-base, as the Nike t-shirt critics were) or give an actual apology, which would go something like, “It was not intended to be offensive, but after looking at it, we realize that it actually IS offensive,” and if you’re feeling really charitable, explain why. You know what’s not intended to be offensive? Black-face. You know what is offensive? Black-face.

Do: “Sorry I did something offensive.”

Don’t: “Sorry you were offended.”

Otherwise, digging your heels in screws everyone over–it makes gay people and their allies look like over-sensitive assholes, and it forces everyone loyal to the Access Fund (which has provided many reasons to be loyal, by being a wonderful organization in so many other respects) to defend you even when you’re in the wrong, and in this case, jump on the “screw you hyper-sensitive gay people” bandwagon. And buy even MORE stickers, and give us even MORE reproductions of this tired, never funny in the first place joke.

23 thoughts on “The Access Fund: Caught in politically correct hell, or ign’ant heteronormativity?”