A few weeks ago, I was having lunch with Jeff, an Atlanta lawyer.

“I have to ask–not to sound like a creepy stalker, but I looked at your grades in law school.  Why didn’t you do law review?”

I was instantly transported back to a conversation I was having years prior, while I was still in school, with an international trade lawyer.  We were sitting in his office in Geneva.  I don’t know what the ceilings were made of, but whatever they were, they looked more expensive than simply covering them in platinum.  Maybe platinum with diamonds sprayed on.  Anyway, he asked whether I was going to do law review or… there was a slight hesitation, milliseconds long, to hint at which was the lesser of the two,

“I wasn’t really planning on doing either.”

“Well, that’s fine, if you want to spend the rest of your life doing slip and fall cases.”

Lawyers don’t really pull punches.  I looked at the secretary as she walked out.  She had just delivered us hot croissants.  She looked like a model.  I was at a loss for words, so I just watched her body cascade through the doorway.

“What?”  I was in my high school guidance counselor’s office.

“You only signed up for one advanced placement course.”

“Yeah, I wanted to take two cooking classes this semester.”

“Well, that’s fine, if you don’t plan on going to college.”

I wasn’t actually planning to go to college at the time.  I wanted to get a GED and go to cooking school.  I didn’t really have a chance to contemplate that–I came out of the closet, my family imploded, an in-state university seemed like the most reasonable escape, and the University of Georgia accepted me.  It was a perfectly acceptable path, though the only one, short of some less glamorous delay.  So I left Milton for Athens, with an estranged family in my wake.

I was back at the Prickly Pear, with Jeff.  “Well, it came down to a question of time.  The law review applications were something to do over the summer, and at that very same time, I wanted to start a climbing club, called Homo Climbtastic.  So I threw the law review application in the trash.  It must have weight five pounds.  Something has to give somewhere.”

“Do you regret doing that?  I know if I had had those grades, I would have jumped at the chance to be on law review.”

Nobody had ever asked me that.  It took me a minute.  In my head, I unwrote the formation of HC, and rewrote the story in which I instead joined the law review.  All of the relationships formed among all of the different people that had interacted with it came apart and joined other connections in the universe.

The most immediate shift in my reality was that without HC, I certainly wouldn’t be getting images in my inbox from Jonathan Elyea photoshopping my image into famous depictions of Jesus:

You’ll probably need to click the next image to zoom in and see it in all of its glory, which shows all of the people I got to know as a direct result of forming the club during that summer.  From left to right: Kelly, Jon, Rio, Todd, Rio, Rio, me, Chris, Rob, Christy, Chavez, and Laurie. 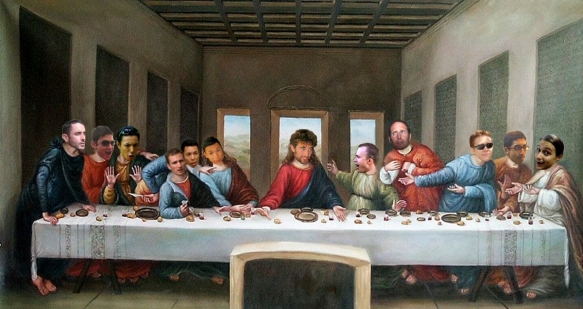 Jonathan intended to photoshop out Judas Iscariot in lieu of photoshopping in the head of an actual Judas, but instead accidentally photoshopped out the entirely innocent Thomas the Apostle.  So thanks to Jonathan’s slip in regard to da Vinci, Todd is depicted as Judas, even though Todd has no ill designs to stage a coup, much less the Facebook admin capabilities to attempt it.  As far as I know.  I’m watching you Todd!

What fascinates me about climbers, and something I’ve discussed (more eloquently) before, is the many alternate futures that stood before them. They ignore a lot of high school guidance counselors and their equivalents to become the people they are today, and ignored the priorities of the universe they were born into to create a new one.  This is the je ne sais quoi that I can’t explain about HomoClimbtastic–it’s not a climbing convention any more than Woodstock is a concert.  It’s a Saturday evening in the salon of Gertrude Stein.  If Matisse made Bear Grylls memes.

We love anyone with the audacity to rename themselves “Bear Grylls”.

Or if Picasso had a period called “High Expectations Asian Father”:

I was briefly concerned about the racial stereotypes conveyed by this meme until all of my Asian friends liked it on Facebook.

I think Christy was frustrated with the proportion of Facebook posts devoted to Bear Grylls themed-meme images. So naturally, I made a Bear Grylls meme for Christy.

When his half-eaten corpse was found next to a box of 500 unopened Clif bars and a satellite phone, it was decided that she either didn’t like Blueberry Vanilla, or thought it was the most efficient way to get him to stop talking.

And in the non-HomoClimbtastic world, I wouldn’t log in and see shit like this when I turn my computer on: 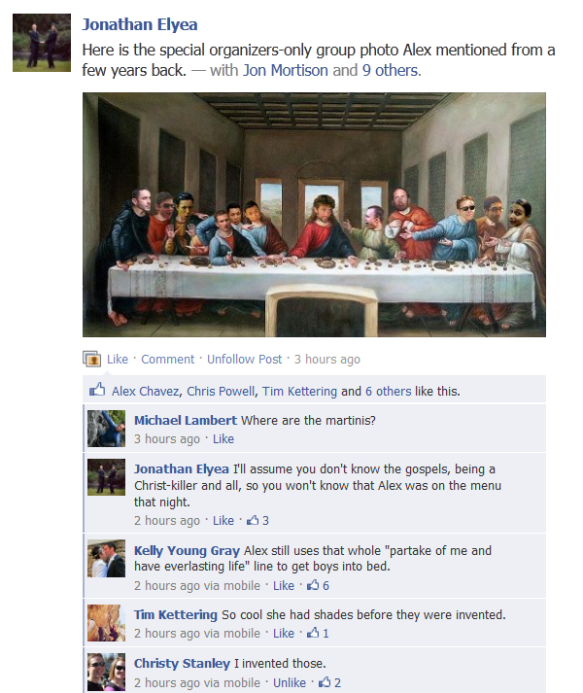 Incorporation into subsequent memes is probably the only cognizable benefit to volunteering at an HC convention.

As chance would have it, when I was living in Geneva some time later, my friend/roommate, an attorney, had a meeting with the Geneva international trade lawyer.

“It was a very awkward conversation,” he said.

I wasn’t surprised.  He was from Serbia, and Eastern Europeans are very straightforward in a way that makes Americans uncomfortable.  It had taken me a day or two to get used to it when I first met him.  “Why was it odd?”

“I told him I was from Belgrade, so all he wanted to do was show me photos of his new beach house on the Adriatic Sea.  He bought a huge beach house just to visit twice a year.  Ten bedrooms, just for his family to go for a week.  I do not understand why Americans do that.”

“I also don’t understand why he bought a beach house there.  You couldn’t pay me to go to that beach house.  That’s the beach where the armies dumped all the chemical and radioactive waste during the wars.  That whole part of the coast is contaminated.  Everyone knows it’s not safe to swim there.”

“Did you actually tell him this?”

“Of course.”  I briefly contemplated what an Eastern European would say to someone if they were actually mad at them.  “He looked at me very strange though.  I do not know why, you do not pay very much for that property because of the contamination.  Everybody in Serbia knows those mansions are not worth anything anymore.  Everybody.  He probably got it for like ten euros or something.  But if I was a rich lawyer with only two vacations a year, I would take my family somewhere that was not toxic, you know?”

“Are you sure he knew about all of that before he bought the house?”

“Well everyone in Serbia knows.  Did you notice how beautiful the secretary was?”

“Everyone else is studying for their exams.  They are all very boring to me.  These classes are pass/fail.  Do you want to go into the city and get chicken and sorbet?”

“Yes.  Yes I do.”  We started walking toward the elevators.  “To answer your earlier question, about Americans–when I was a kid, I bought a lot of Legos; some of them I never played with, I just needed them there to complete the fantasy I was living in.”

“I have friends who do this.  Live in a fantasy, as you call it.  I do not tell them that they are.  They look happy to me, so I think it is ok.”