Inevitably, there is a day on every climbing trip that becomes known as the death march.

There is no logic to the death march.  Perhaps you have one climber who has climbed ridges in Austria, and the other has hacked her way up a series of ice pitches punctuated by snowy dunes.  And yet, somehow, a thirty minute–

An hour, or so, long hike on completely level ground–

Except at the end, becomes known as the Death March Wherein Alex Forced Everyone To Go to An Area That Only Had Climbs He Could Do.

“None of the women could do.”

“I refuse to contemplate gender in this matter.”

“Half the group couldn’t do, plus another guy.”

So there were a lot of climbs that only me and Jon and Nathaniel and Josh Cumberland could do.

“You were the only one able to lead any of them, except for the one on the left that Nate put up.”

But how often do I run into Josh Cumberland?  Not often enough, and I figured, if there’s ever a time to see if I can cry, cheat, and scream my way up Skull in the Hole, I might as well do it with a cute straight boy to impress and nobody available to get my draws down to give me that extra piece of motivation.  Which worked, by the way.  The crux went perfectly fine, and I pulled the move after one kind of test hang, but for reasons that I don’t quite understand, the most anxiety producing fall is also the safest, which is the one from pulling over the lip.  I blanked my memory what I did exactly to hang on, but whatever it was, it required a lot of being all butch after to show how not about to shit my pants I was.

And for those of you out there about to tell me that Skull in the Hole is soft and just used by losers who need a soft-rated overhangy route to impress people with, FINE.  You CAUGHT ME.  GUILTY.  Maybe the route should be called Dick in the Hole because that’s what you’re using it for.

(I can imagine my homo readers writing down “Skull in the Hole” in their list of “Twelves to make people think I climb twelves” list, now that Rochampeaux got the axe.  P.S.: Skull in the Hole is easier!)

But I don’t deserve that much animus, because it wasn’t like there was anybody there I could conceivably have sex with.

“No, but you’ll climb it later and pretend you flashed it when there’s some hot gay guy with you.”

“If I was planning on doing that, I certainly would not be blogging about it so potential hot gay guys would find out I had to grab draws to get up a soft twelve.”

“Nobody reads your blog.”

Mountain bikers are weird.  They will actually stop you on a trail to discuss how fucking exciting it is that in the middle of this one trail, THERE IS A BANKED TURN.  Or after biking for four miles, YOU CROSS A CREEK BED.

These are the Orgasms of Mountain Biking. 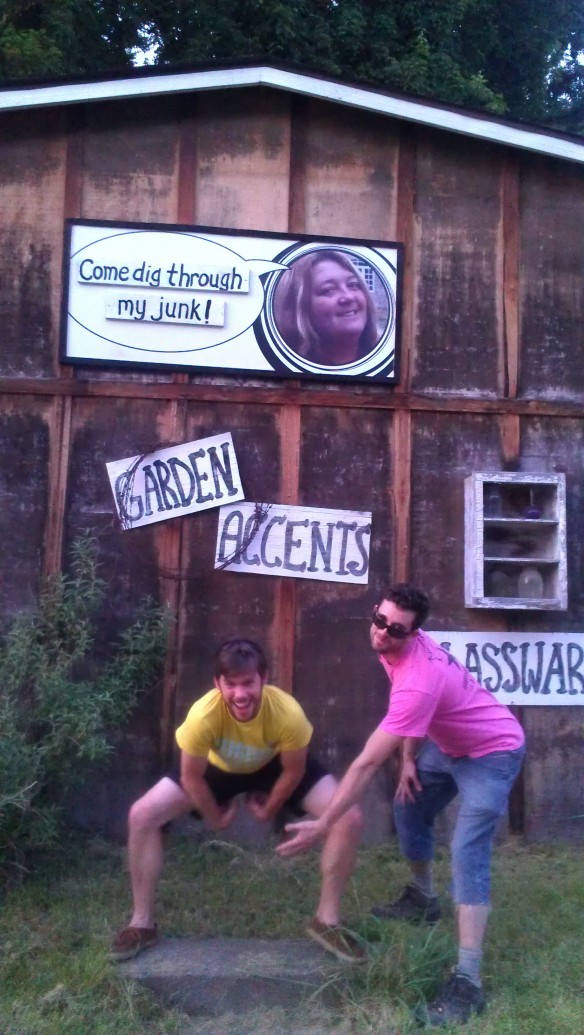 Jon and his junk in front of one of the many Fayetteville landmarks. Me blocking out the sign to say “assware” was just a happy accident.

Afterward, when the four of us were having a grand ole time at the campfire, I got to thinking about what brings friends together.  Me and Laurie don’t technically do the same things.  It’s not that you are able to come to some kind of agreement as to how to split your days up, with one day mountain biking and another day death marching to Meadow River, or that you can poke fun at each other about it.  It’s not even that afterward, you can get drunk and smoke cigarettes beside the fire.  It’s that you can get together, around that fire, after the fun-poking, with your beer, and your cigarettes, surrounded by people you’ve been through thick and thin with, and talk shit about people you all hate.

Yes, there’s nothing like that end of the day, drunken rant, “lllllleeeeeeeeeeet me tell you about [redacted].”

Nate: “Yeah, that pissed me off, one of my professors required it for a class, so I had to rejoin, so every time I log in to check my work, it’s people talking about how they’re pregnant, or talking about how much fun they’re having, and I’m thinking, if you’re having fun, you’re not on Facebook. And I don’t care that you’re pregnant.”

Pretty much whoever I’m with climbing, at the end of the day usually, there’s a fun moment when we talk about ex-husbands, ex-girlfriends, friends turned stalkers, and the like.  Once, when I was on the road with Susan and Sean toward Little River Canyon, I had an epiphany:

“I don’t see why people enable him, I mean, isn’t it obvious how much of an asshole he is?  Why do people put up with it?”

Me: “You know how we always get to talking about the people who abused us?”

“Well I was thinking about what those people say about us, if they’re ever in their cars, analyzing our motivations, making fun of how we operate, and I think I’ve figured out what they’re saying.  They’re saying, my god, all these people do is hang out way too long with people who treat them like shit, and then spend hours and hours and hours with their friends analyzing the motivations of the people who abused them, when they could just stop hanging out with assholes.”

Susan: “If they were smart or introspective, and they’re rarely both, because that’s not the abuser personality, then that’s probably what they would say, if they talked about it, which they of course wouldn’t.”

“It’s probably the whole being introspective and smart thing that gets you abused in the first place.”

So we climbers stumble through this world like very, very ripe tomatoes on legs, and climbing trips are like big soft tomato fests free of sharp objects.  And we sit around the fire with our beer and our cigarettes, and I realize the friends and beer and cigs are also at home, and thus, take note of the real reason returning there is so scary.