There's a force of revolutionaries in Muir Valley fighting for your right to pee anywhere. They're armed with sharpies and wieners.

Today there was a climbing incident.

About a half-mile away across the valley, there was a climber on an 80 foot slab on top-rope.  It was a 5.6.  I wouldn’t say the route conformed to the ADA specifications for wheelchair access, but it was close.  Normally one wouldn’t notice a climber a half-mile away, but she was WAAAAAAAAIIIIIILING.

It was like a scene out of Hostel II.  It wasn’t even crying, because using the word “crying” can be mistaken for “whining”, whereas this was full blown blubbering, convalescing, assailing the entire world with tears and words gurgling out of her mouth like she was chewing mouthfuls of Alka Seltzer tablets.  When we first heard her, we thought maybe she was leading some epic trad route and had fallen and sheared her arm clean off, rather than looking over to see her standing at a no hands rest with a top-rope tighter than a steel cable.

So, this went on for over an hour, after we had led and cleaned five or so pitches, the whole time listening to what I *would* call a meltdown, but I’m pretty sure nuclear reactors melt down faster.

“It sounds like she’s trapped in her own personal nightmare.  Why haven’t they just lowered her?”

“I didn’t know it was even possible to cry that long.  I thought your tear ducts ran out or something.  My kids max out at like twenty minutes, even when I don’t let them watch Builder Bob.”

Just when I thought she was loud while crying, she somehow yells loud enough that it feels like someone’s in my ear from a half mile away, “I’m seriously going to come over and beat the shit out of you!  Seriously!”  I looked to my left, thinking she had teleported.  I had taken umbrage!  This would not go unretorted!

“I could give you a microphone, maybe you could cry louder!”

“What’s slowing you down?  Is there a bear?”

“I’m seriously going to beat the shit out of you!”

“Does the bear have a gun?”

“Show me on the doll where the bear touched you.” 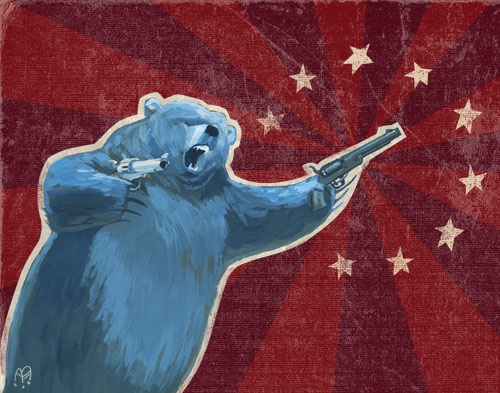 Our party became concerned that she, or more likely, her belayer, who if he had any sense would have munter-muled the belay to a tree an hour ago, might come over, so I changed out of my bright pink t-shirt to conceal my identity.  I wasn’t really concerned about being able to take someone who can’t climb a 5.6 on top-rope, but we felt that if she was able to convince a group of people to hang out with her for more than five minutes, she could convince the police of anything if I dislocated  her arm.  Better to just avoid the possibility altogether.  I remember once when a girl hit me in high school, and then, being the feminist that I am, I punched her, and then I got lectured by various people for like a week about how “you’re just not supposed to hit girls even if they hit you.”

“You know, she cried after you hit her.”

“Maybe that’ll teach her not to punch people she can’t take in a fight.”

My party was hoping to see her at Miguel’s, but they didn’t see her, so we debated putting up a post in the Missed Connections section of Craigslist.

“Me: heckling fag in pink t-shirt.  You: hot mess having an epic meltdown on a 5.6 slab on top-rope.  My group really wants to know the beta for the stopper move up there.  Kthx!”

6 thoughts on “I am like, so serious right now.”