Three climbers clipped into an anchor point respectively using a clove hitch (left) and figure eights on a bight (middle and right).

So I see a lot of ‘mos and non-‘mos alike doing some weird shit when they attach themselves to anchors, and while most of it’s alright, some of it’s inefficient and some even downright dangerous. Today I will discuss one of the most common of the dangerous situations, which is when a climber climbs above an anchor point that he or she is attached to using a static low-stretch sling. You might think this would be an uncommon situation, but it can happen quite easily and could have disastrous consequences. Common examples include:

– You clip in directly to a crux bolt on an overhanging sport route to rest. Then you forget about having clipped in directly to the bolt, call “on belay,” and launch for that big dyno without unclipping. This can be really dangerous!

– You clip directly into an anchor point near your feet while standing on a ledge to take pictures, to rappel, or to setup a top rope. Then you slip and fall over the edge.

– You clip in directly to an anchor at the top of a single-pitch sport route or anywhere on a multi-pitch route and climb above the anchor to reposition yourself in a better stance or to make room for your partner. Then a hold unexpectedly breaks and you fall onto your anchor point.

Dean M. and I in the belay station for "Hard Left" and "Hemisphere" in the Red -- I am clove hitched to a large biner attached directly to the rappel chains. Falling from here if the chains and rope were taut would be approximately factor 1.5 - 2.0, as there is 3 feet of "rope" out and I would be falling 5-6 feet.

“So what if I fall a few feet,” you might ask. The answer: You can break bones or snap carabiners from a fall of even a few feet. Even if the total distance you fall in these scenarios is, for example, 4 feet (on a standard 2-foot sling), this produces a maximum fall factor of 4ft / 2ft = 2.0 — the highest possible in normal climbing activities — and corresponds to ~16kN of impact force for a 160lb climber using any sort of low-stretch tether (a Dyneema or Spectra sling or quickdraw, or even a PAS or daisychain), in theory. 16kN will rip out your last piece of gear or break a cross-loaded biner, but these are the least of your worries — such forces can cause internal injuries, and, in a multipitch setting when climbing directly off of the belay, have the potential to destroy your anchor and send you and your partner hurtling into the abyss.

Sound incredible? Check out this drop-test video by DMM, which demonstrates what physics geeks and savvy climbers have known to be true for a long time: http://www.dmmclimbing.com/video.asp?id=5 — falling onto static low-stretch material can be disastrous, and not just in theory. Just a 12 inch, factor 1.0 fall onto a Dyneema quickdraw produced a maximum impact force of 12.5 kN — that’s going to hurt!

What could happen when a carabiner receives cross-loading forces.

How can one deal with this potential danger? The old school answer is simple: Never climb above your anchor point for any reason, or more precisely, never let slack develop between you and the anchor point. This remains sounds advice if it were always followed.

New school thought offers an equally simple but greatly improved answer: Tie in with the rope. Peak impact forces in climbing falls usually are mitigated by several factors afforded by the climbing rope, including material stretch (lead ropes are dynamic) and knot tightening at the tie-in point in the event of a fall. When you are directly connected to an anchor point with a static low-stretch sling, however, these force-reducing properties in your safety net are largely absent.

The simplest way to regain these properties would be to tie into the anchor with the rope. This can be accomplished by simply using the rope attached to your harness to clip into the anchor point using a clove hitch or a figure-8 on a bight. This method of clipping in covers many common scenarios such as belaying on a multipitch route or working near a cliff edge where you could take a fall. New school thought would argue that there is no reason to use a short, unadjustable tether in such circumstances; this is also when I most often witness ‘mos and non-‘mos alike clipping into the anchor with a Spectra or Dyneema sling. I always use the rope instead of a sling to attach myself to the anchor when I can.

For scenarios when you must use a sling to connect to an anchor point (preparing to rappel or to clean the draws at the top of a sport route), in addition to following the old school advice of never fall from above your anchor point, you can improve your safety margin by replacing your Dyneema or Spectra tether with a nylon sling, which is stretchier.

Stretchiness is relative. For climbers, the lead rope usually is the stretchiest material available, but if that’s not available for tethering (e.g., you’re preparing to rappel), nylon is stretchier than Dyneema or Spectra, and DMM’s drop tests show an improvement in terms of slightly lower impact forces when falling onto a nylon sling.

Although replacing your Dyneema or Spectra tether with a nylon one will reduce impact forces, those forces can still be high enough to be very unpleasant at best in the case of a true factor 2 fall. However, in conjunction with being vigilant about not allowing slack to develop in your tether, using a nylon sling is a good compromise. I prefer to use a nylon tether to attach to anchor points and save my Dyneema and Spectra slings for quickdraws and for extending my gear placements. 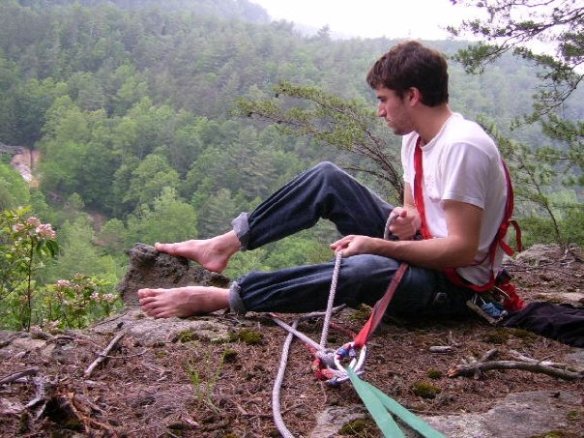 Rowland using a nylon sling to clip in while belaying near a cliff edge in the New River Gorge. There is no slack between Alex and the anchor point, reducing his potential fall factor.

1 thought on “Clipping “In Direct””