Reposted with permission from Owen, our displaced New England climber!

So the good part about being in New York in the summertime is that, unlike summer in SF, I can wear tank tops all fucking day long. I went straight to day drinking from leaving the ex’s new apt and picked one up on the way to change out of my sequin dress. But that’s basically where it ends.

The bad part is that I’m not in The New, where it’s surely way fucking hotter, in every conceivable sense of the word.

I first found gay climbing via Flame and Flash as a total fucking noob. It was a year ago. Mikey reached out, and was patient while I had my little gong fest on a 10a in the gym. Then he gave me hard-on while he redpointed 13b. But I digress.

Never had I met as diverse and fun group of people than when I met the FnF guys. That of couse until I went to Bishop for HC West.

We arrived, stocked up on beef jerky, and headed straight into MY gorge (Yes they named it after me, and yes Rio, please go after the oral sex reference)

I met Chavez, and St Louis Crew and then headed to The Great Wall of China. Tim Ketting was actually wearing a harness (seriously, and not even the kind used to get railed). Rio introduced himself right after lowering off of Aurora (he was scared as shit and laughing his ass off), and Connor kept pushing me up harder leads so I could properly get my then twinky bottom lead head on right. We kept crushing for the next 4 days and raged the next four nights. I hung out with Thomas and Matty, crushed it with the heelhookers , Marlyand and Texas, and got into rescue mode for a near epic. 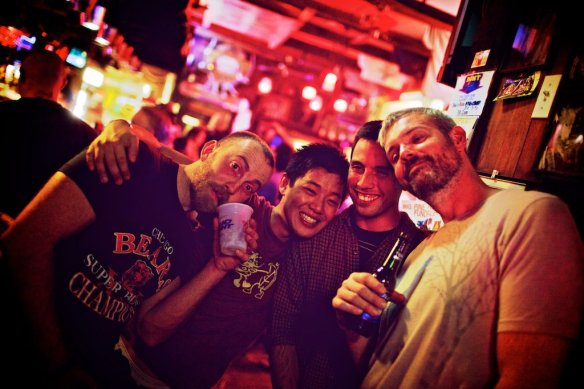 Somewhere between the acknowledging one of the trip’s defining memes (“Bird poop, don’t fall, gay climbing…”) and gorilla gay-bar-ing Rusty’s saloon, I realized that this scene was larger than fucking life.

We headed back to SF with quick stopover at Matty Lamos’ Mom’s house so we could have coffee and look at the hilarious high school photos on the wall (add 30 pounds and 6 inches of hair. Despite how hot he is now, those were pure. fucking. gold). I ended up in SF with torn hands, a shit ton of fond memories, and no STI’s. It was epic.

I promised myself I’d make to the New, and for reasons that only leave myself to blame, I didn’t get on top of my shit and make it down.

So as I sit here, refreshing Grindr and Adam4Adam, getting ready for a days worth of meetings all over a humid, schweaty, sticky Manhattan and read the Facebook posts, I’m filled with a warm chest full of… *sigh* regret.

I really wish I could have been there. 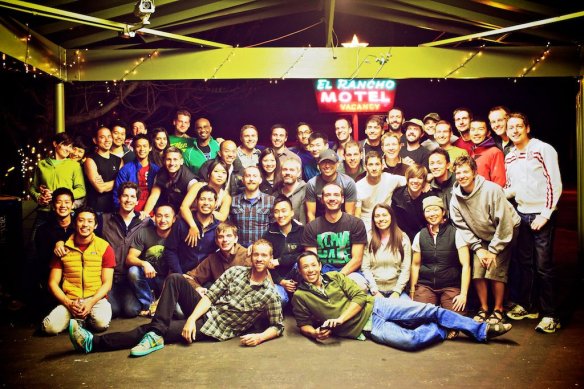 I try to explain to family and non-climber friends what this oddly named queer climbing thing is all about, and it’s honestly hard to put into words. They typically ask why we need our own climbing club, and if we’re that oppressed, or something. No, granted, Uh-Merica isn’t uniformly that accepting, but the question misses the point. What shocked me about Homo Climbtastic was how such a diverse group of guys and (yeah, fucking represent!) girls the sport of climbing attracts. Better still, how 50+ of us can unite in these random po-dunk towns where Sarah Palin could likely do OK at a book signing, and not only rage, but earn the respect and praise off the locals. Heads up Rick Stantorum, the gays are taking a big, slippery whipper into a town near you.