It’s been like six thousand degrees Kelvin in Austin this August, which is roughly equivalent to the temperature on the surface of the mother fucking sun.  Climbing has been…well, challenging.  The heat makes me pine for a new, exotic climbing destination.  And that’s when I get my mad on that we can’t drive to Miss Mexico any more since the Sandanistas or who the fuck ever now control the highways.

No doubt you’re thinking “Kelly, what the fuck?  It’s hotter in Mexico than it is in Austin right now.”  First off, rude…my life coach says you can’t talk to me that way anymore.  Secondly, I don’t fucking care.  I crave something different, and frankly  105F versus 107F doesn’t feel much hotter…unless you’re throwing a hacienda with a mother fucking pool into the mix.  Yeah, I said it.  What.  I want to climb in a place where there are multi-pitch sport routes, and even though it’s hot you can go swimming at your hotel afterward.  ‘Cause that’s who I am.  I’m a gay man who climbs, and I want room service.  Miss Cho said it best:  “Where’s my fucking parade?”

Now, as I understand it, the cartels are fighting over territory…specifically, ports of entry to the United States.  You’re probably wondering how I know this?  My good friend Jose Reyes Ferriz, Mayor of Juarez, told me so.  OK, so, like, we’re not good friends…but I met him at this conference a couple of months ago.  PS, he’s a partner in a law firm that specializes in Maquiladora programs in Mexico…no conflict of interest there, eh?  Anyfuck, Sr. Ferriz was all “Hey, you know why the cartels are fighting in Juarez and other ports of entry to the US?  ‘Cause you Americans consume more drugs than any other nation on the face of the fucking planet, and they’re good business men who just want to get their shit into your country.”  I’m paraphrasing, I don’t think he dropped an f-bomb in his speech.  But OK I get it, we use lots of drugs & Mexico can’t get too involved in a conflict that would, in essence, spark a civil war.  And let’s be frank:  the people who consume all those drugs?  Republicans and Conservative Christians.  Fundamentalist preachers, conservative talk show hosts, and Republican senators.  Anyone on the verge of getting busted for having (lots of) gay sex in an airport Men’s room, basically, is who I’m talking about here.  I don’t have any proof, I just don’t know who else has enough money to consume all of those drugs…and there’s LOTS of money in being an ultra-conservative d-bag.  Do you really think Ann Coulter got to be that lovely shade of grey by JUST throwing up everything she eats?  Darling…how refreshingly naive.

The solution, I think, lies in the recent immigration battle going on here in Texas and in Arizona.

Now, for the most part, it seems like Republicans and Tea Baggers are anti-illegal immigrant.  Or pro-immigration reform, depending on who you ask.  Unless said immigrant is a coke mule, but you get my point.  And, according to their rhetoric, it’s NOT because they’re racist.  I know a lot of these people, and I can tell you that they are most definitely NOT racists.  Despite the emails they send me that are somewhat racist in tone.  And despite the racist jokes they tell me that make me sick to my stomach.  The racial slurs spoken in the privacy of their homes don’t mean anything, either…they’re not racist.  ‘Cause they say so.  All empirical evidence may suggest otherwise, but they’re definitely NOT racist.  Dammit.  They’re just worried about the situation at the border.  As it relates to brown people.  Or something.

Now, since I know so many of these people, I also know their habits.  I know what they like.  What makes them “tick”.  I know that the one thing in the world a Republican or a Tea Bagger really wants…what makes them happy…is to feast on the souls of the innocent.  That’s right, just a little innocent soul* once in a while, and these people are like little teddy bears.

And so I propose that we allow Michele Bachmann to sacrifice a couple of babies once a month or so.  Let Sarah Palin get her a big ol’ mouth full of sweet, pure latino soul, and all will yet again be right with the world.  I’m pretty sure Republicans only do lots of drugs because even they’re afraid to admit their true addiction, so we’ll see our nation’s drug use plummet to record low levels as conservative anti-gay politicians go back to their original drug-of-choice (innocent souls) while having gay sex with prostitutes.  It’s win-win!  Immigration reform is no longer an issue because the right-wingers get what they REALLY want (in addition to $3/hour housekeeping and lawn work) and finally shut the fuck up about it, and the cartels lose enough money that they can no longer afford a sustained war against one-another.

All it’ll take is the death of a few children, or in some circumstances, very innocent adults, and I’ll be able to drive to Mexico so I can go climbing.

I’m attaching a picture of Roger wearing a googly eyed speedo so that our reader’s souls can get tainted enough that Republicans won’t want to eat you.  ‘Cause I’m a giver like that.  You’re welcome. 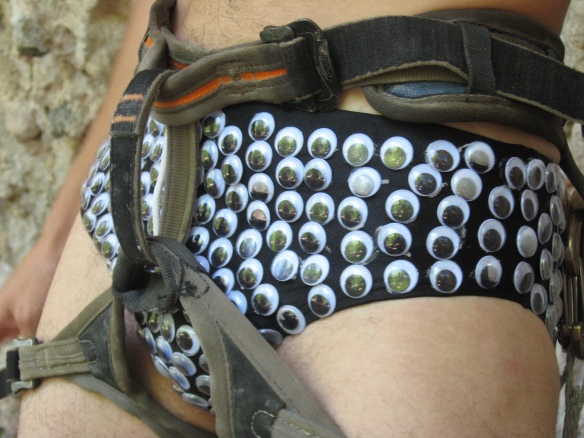 *Homo Climbtastic in no way endorses the consumption of souls…innocent or otherwise.