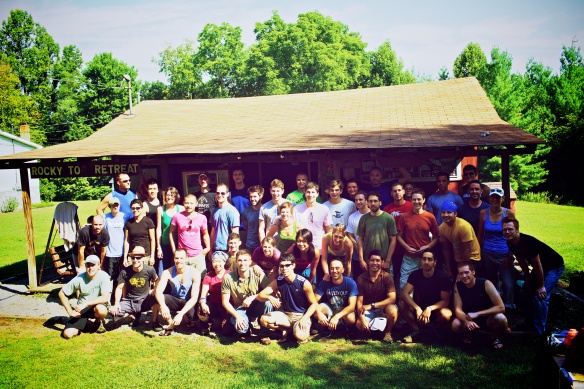 The next morning, we all swung by Roger’s Rocky Top Retreat, so that we could get a group photo with Fayetteville institution Roger.  I still don’t know Roger’s last name, although I keep meaning to ask him.  Roger was kind enough to put up one of our posters, which made me feel even more guilty about the fact that we were camping at Chestnut Creek (I lost that fight to people who require level tent space).  I suspect next year the appeal of forgoing quiet hours will swing the vote toward Roger’s.

We took over the entirety of Butcher’s Branch, and at the base of Flight of the Gumbie, Matt revealed that he had brought his dresses and wigs.  So there was really no choice but for us to do a drag climb.  I was going to climb lead, but the only open climb nearby was slab, and I prefer injuries I can explain.  These were five of my favorite photos.  I’m the blond. 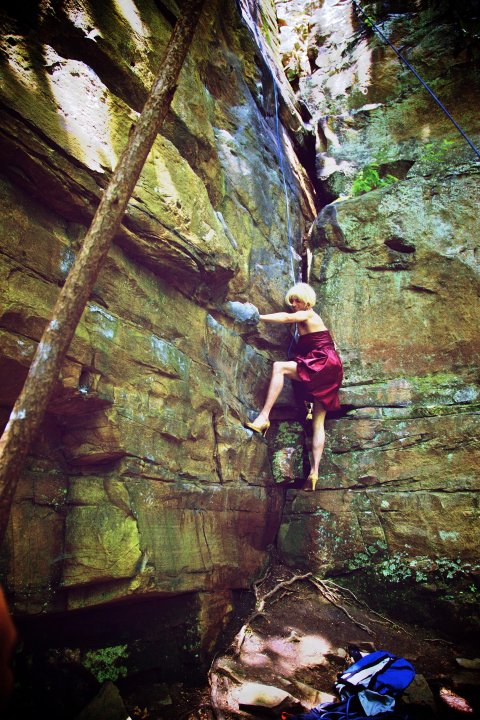 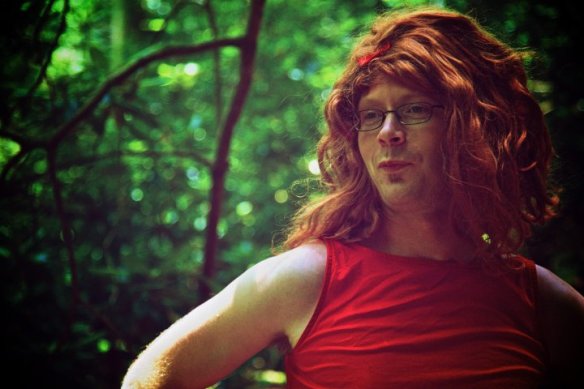 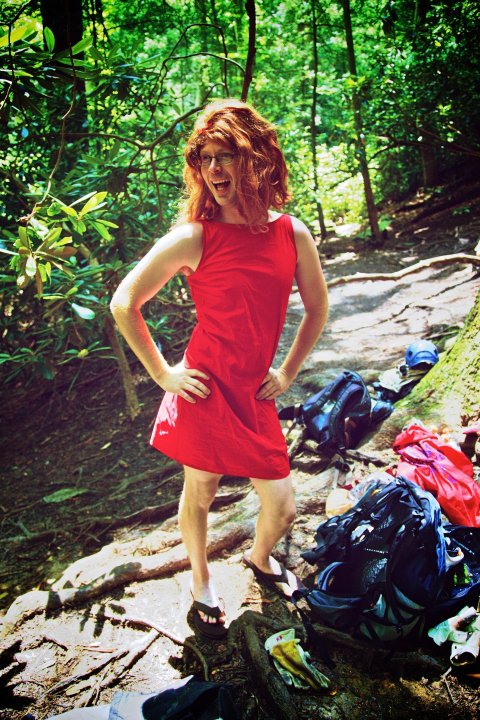 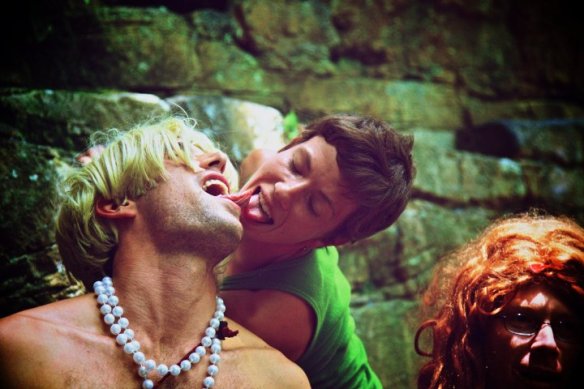 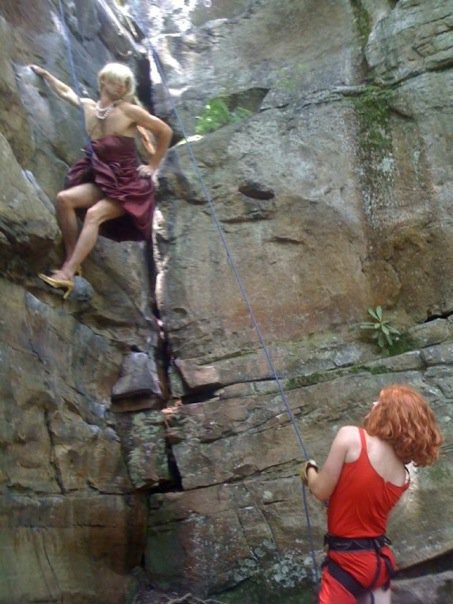 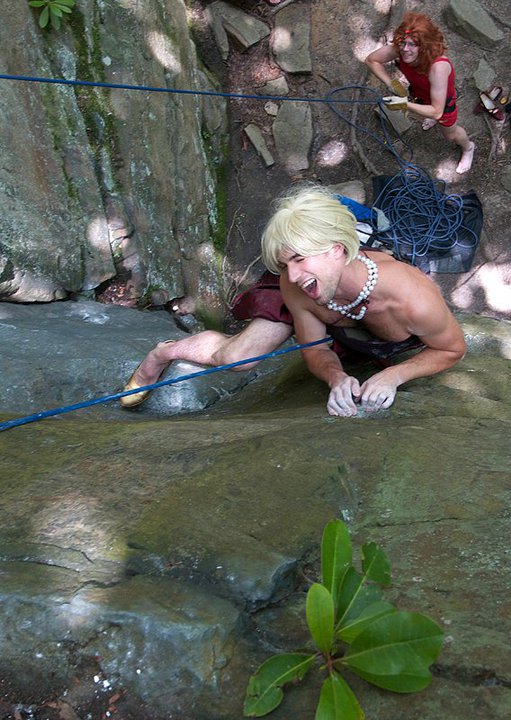 …….I nearly sent the damn thing on TR, but between the last clip and the anchors my heels slipped off on the smears and I had to stop to slide them back on.

Kate from New York led some God-awful sandbagged 12b that raped me on top-rope, even out of drag.  John fell while clipping on Flight of the Gumbie and after a thirty foot fall and a not quite soft enough catch, rammed his ankle with enough force to go all blue and purple–which scored him the “best lead fall” win in the anti-comp and a free pair of Chacos. 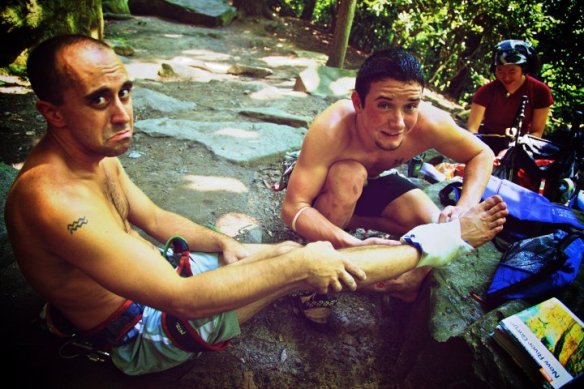 That night, the dictators picked up a to-go meal and discussed dictator things on the lawn, so I didn’t get to see what all the convention attendees got up to.

Saturday, I joined a group of 14 HC’ers to go rafting with the Rivermen.  The head guide was kind of a douche, and totally not rolling with our faggotry, but the two guides who were actually steering the HC boats were fantastic and all about being stowaways on our queer train.  One of them, Shea, steered her boat over to my boat, guided by Abbi.  “Hey,” she said, “what do gay horses eat?”

Matt started to yell, “haaaaay,” but then Shea interrupted, “HORSECOCK!” and HC’s next official inside joke was born.  For the remainder of the day, all we could yell at each other was “horsecock!” 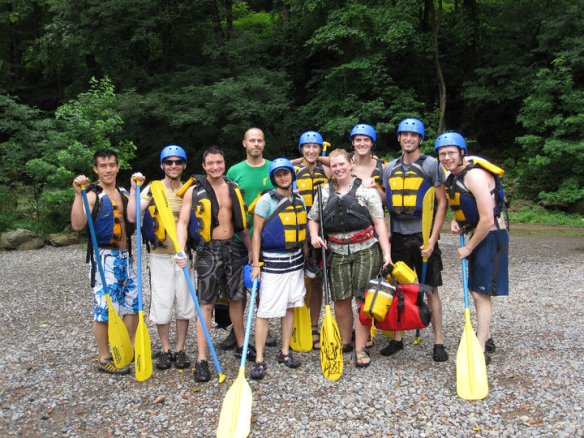 We had lunch at the Secret Sandwich Society, and I got the Ulysses, which was really good, and so were the chips, although the mac and cheese tasted kind of funny.

That night at the campground, Connor expressed to me that maybe I should play bad cop a bit more with the quiet hours, because “we are,” he said, “whether we like it or not, representing all gay people.”

Dad called me on the phone to talk about mom, whereupon I learned that it had only taken a few hours for photos of me in a dress to show up on Facebook.

“Maybe you should have shaved.”

Late Saturday night ended with smores, and therefore, a chubby bunny battle.  Laurie egged me on to go up against the other dictator named Alex, Alex Chavez, and so we were stuffing marshmallows into our mouths one by one and saying “chubby bunny.”  I got up to about 7, with marshmallows oozing out of my mouth, when I saw a good opportunity to forcefully make out with Alex and hump him on the ground, as pictured here. 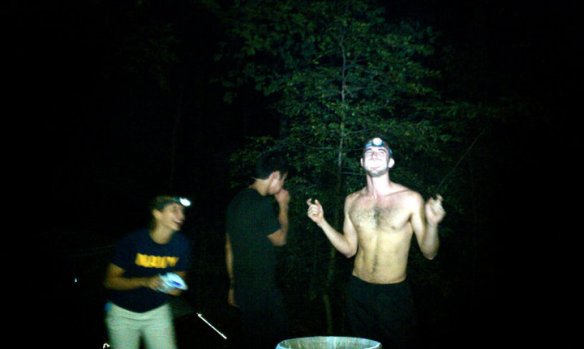 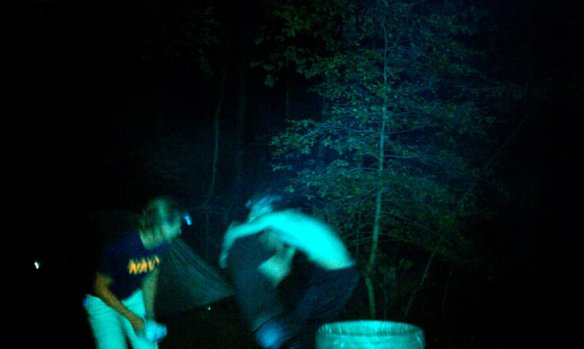 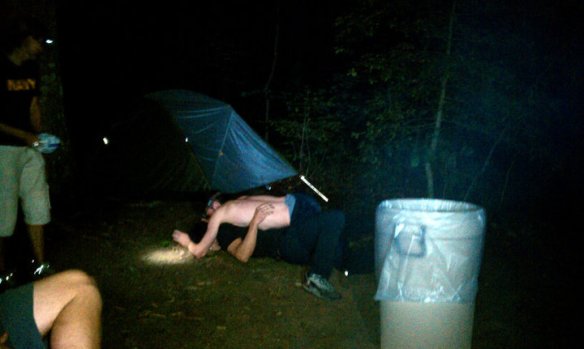 We ran into campground owner Brian in the bathroom when we went to wash the marshmallow off.  “We had a chubby bunny competition get violent.”

The next morning was a group breakfast at the Vandalian.  The food was amazing, as usual, and we had the anti-comp award presentation.  We gave away the goods from Chaco, Prana, Black Diamond, Friction, Beta Clothing, Aveda, Waterstone Outfitters, and drag superstar Pandora Boxx.  Tim, who took most of the photos in this report, got a prize for being our favorite ‘mo photographer. 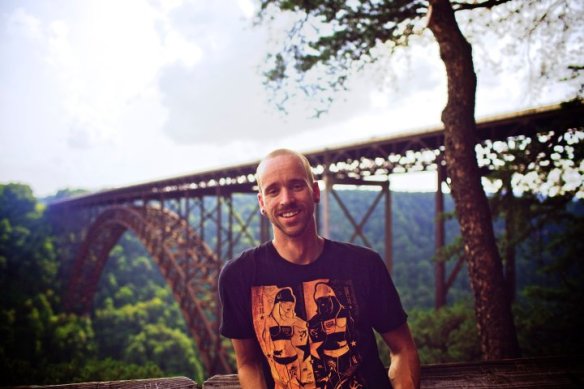 Tim. Yeah, I would have, but Jon got to him first 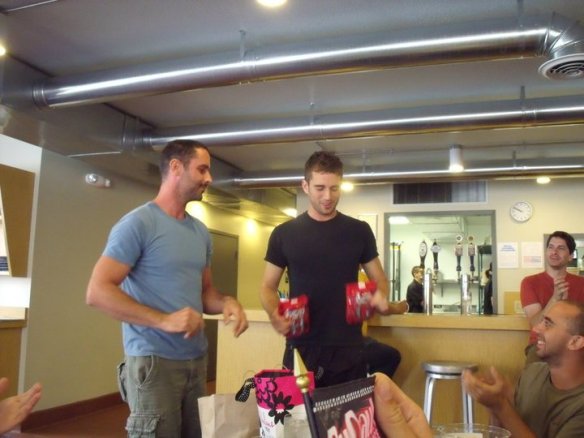 We got worried later, after the anti-comp ceremony, that maybe we were too crude for the Vandalian, so I texted Porter to be all like, “I hope we weren’t too crude,” and he wrote back, “no, it was xxxpected,” and so all was well. 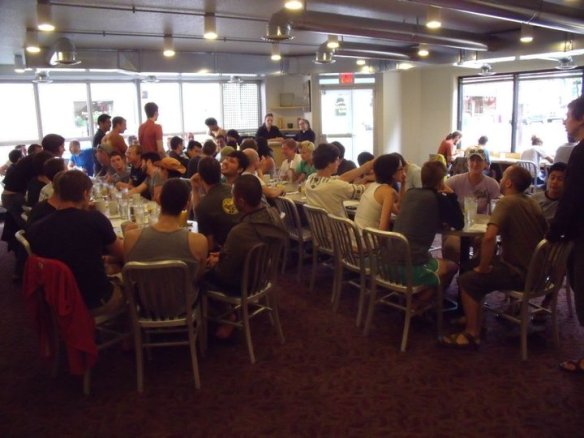 Just as we stepped outside, Deadpoint Magazine arrived for an interview, so I stood on the street corner within the auspice of a tape recorder. He asked, “Why did you start the club?”

DPM, I’m pretty sure, was more interested in the social justice-y aspect of HC, which dances in tandem with our tendency to act ridiculous.  I usually have trouble speaking seriously of social justice and the challenges stemming from discrimination faced by the queer community, e.g. the 800% suicide rate, which DPM brought up.  I let the others talk about discrimination present and past. For me, HC was/is about creating a new world, rather than working on an old one. Like Opus’s departure for Outland, I figured everyone I liked would eventually follow me in.  The most I would do for the old world would be to Bedazzle (TM) the portal so it would at least be easy to find.

Standing there on the streetcorner, I realized I had come a long way.  When I was in my teens, I think I felt ashamed of the crude gays in the dresses and the hotpants, because if only all the gay people would just act like straight people, talking normally, buying life insurance policies and houses and getting married, being responsible, and fitting in with gender expectations, and not being crude, THEN the straight people would accept us.  Two martial arts and many pool table hustles later, I finally realized that straight people didn’t worry about what other straight people were doing or whether they were properly representing other straight people, and if they weren’t taking collective responsibility for 2 girls 1 cup, I didn’t see why I had to prove shit.  All I really wanted was for people to be free to do what they wanted.  Up to and including climbing 5.10 in a dress. (Next year’s goal: send Apollo Reed in drag.) 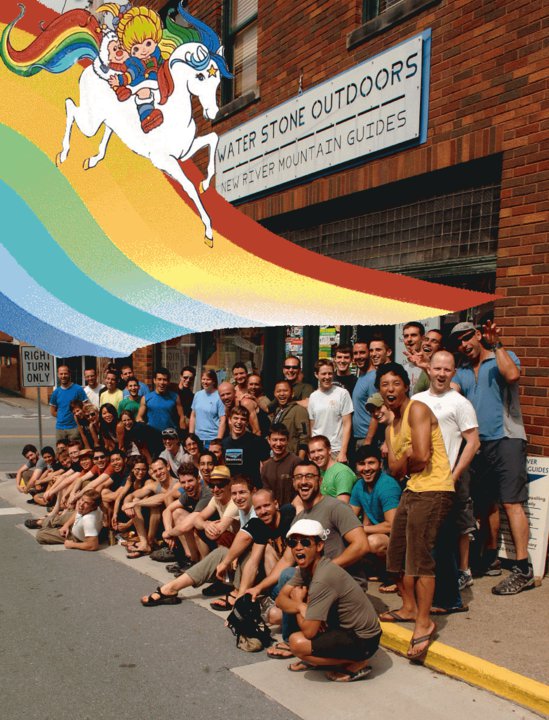 Nikon sells a filter that's capable of removing the unicorn rainbow in front of Waterstone, but we didn't have it

We posed in front of Waterstone for a group photo, yelled “horsecock” in lieu of “cheese,” and then everybody went to Bubba City, which turned out to be a little bit of a disaster.

A correction: Well, a pseudo-correction, as I left something open to misinterpretation; Connor’s comment was only in regard to quiet hours, he wasn’t suggesting that we tone down our swishyness, just that we not be assholes by keeping the campground awake all night, whether by drag show or by alligator wrestling.  (Although that does give me a new idea for next time…)