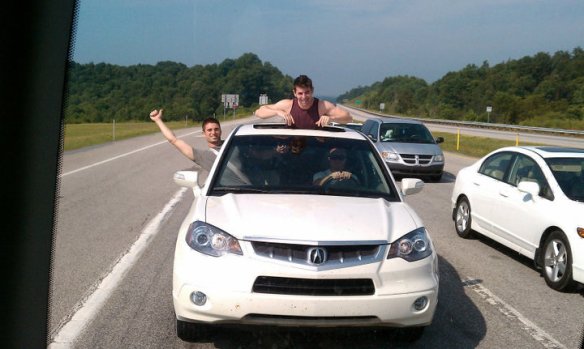 After a long and illustrious history with Supertopo, I write for them a trip report, as requested, describing the goings on of Homo Climbtastic’s excursion to the New River Gorge in West Virginia. Now, I’m not quite sure what to say–I hate reading descriptions of trips in climbing magazines. I’m not sure if it’s because their trips fail to involve climbing in drag, or their descriptions suffer a painful lack of brevity–so for the sake of interest, I endeavor to address both. Maybe failed in the latter respect.

The first matter involved getting our carpool together, assembled from me, Chris, Mike, and Connor. We had to pick up Mike and Connor from the airport, because they flew in from San Francisco. It throws me for a loop that I now know Mike and Connor, given that I nearly went to Berkley for law school, and so knowing them gives me the fatalistic impression that no matter what I do, HC causes my life to turn out the same way and with the same people no matter what. (HC = god = chuy.)

As usual, we stopped at a mid-range chain restaurant, O’Charplebee’s Tuesday, for a mid-trip lunch. The waitress asked me what I wanted to drink.

I was soon buzzed. The waitress came back, took our food orders, and asked if I was ready for round two.

“What would you chase this with?” I asked.

“Well if you were a nelly gay bottom on the way to a gay rock climbing convention in West Virginia, what would you chase this with?” 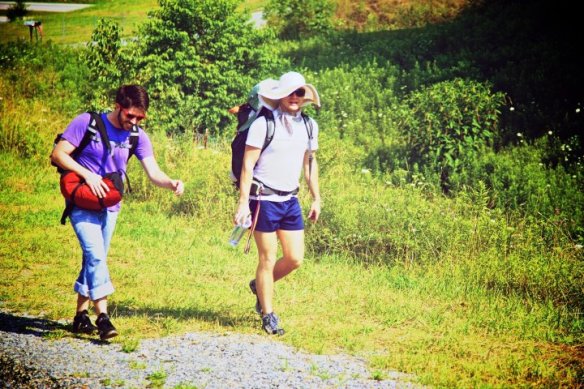 We stopped at the Fayetteville Wal-Mart on the way into town, so that Chris could pick up a sun hat and so I could pick up tuna. I set up my tent at Chestnut Creek, and briefly debated whether I should clear a space for a midnight visitor. I decided against it. Now that HC is huge, I’m usually too busy with trip management to mack on anybody, and I promised myself I was going to stop dating climbers. By the first day, all of the gay neuroses were on display–am I butch enough? Am I too femme? Am I single-handedly proving to the world that homos are responsible enough to adopt children? If I’m gay and a member of a religious or racial minority, do they cancel each other out? But fortunately, as is the Homo Climbtastic spirit, most of us were there just to have a good time, and whether we reinforced or shattered stereotypes was a casual byproduct of doing whatever the fuck.

The first day, a bunch of us went to the Coliseum and worked Apollo Reed. “I heard this was the most popular 13a on the east coast,” somebody said. Ann Raber, in the tone she uses to feed gumbies through a tree shredder, said, “yeah, it’s a classic, which means it’s probably well protected and soft for the grade.” And if that didn’t suck the wind from my sails after I got through the first crux, watching her later flash that section certainly did. Whatever. I still feel good when I see Ann crush something, because I’m pretty sure I’m the subject of her massive sex-crush, and if she climbs that hard and wants to do me, I must be pretty hot. 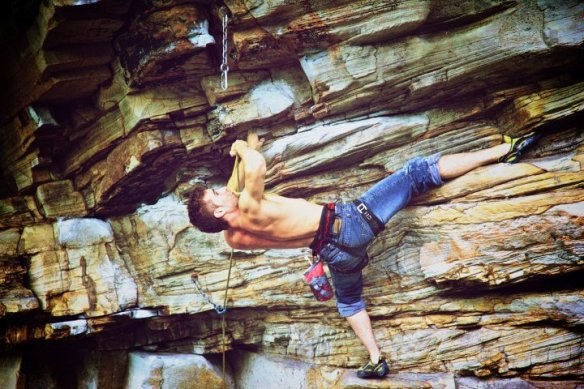 Mike sent Apollo on his first attempt of the route that day, which would later score him the “Best Send” win at the anti-comp and a free pair of Chacos. Rather than shower, we just stayed as late as we could get away with at the Coliseum before we headed over to Pies and Pints for dinner. They cleared out the back patio for us, so that the 40 or so queer-ish climbers that had arrived the first day could talk about double penetration and the dangers of getting a yeast infection from scissoring within eight feet of the children’s playground. (They might as well know the dangers of scissoring now. As compared to AIDS and pregnancy, the thought of cheesy discharge being pretty much the worst risk of sex makes lesbianism the most appealing of the sexual/gender orientations, so they should know early enough to start taking hormones before they grow sex organs.) 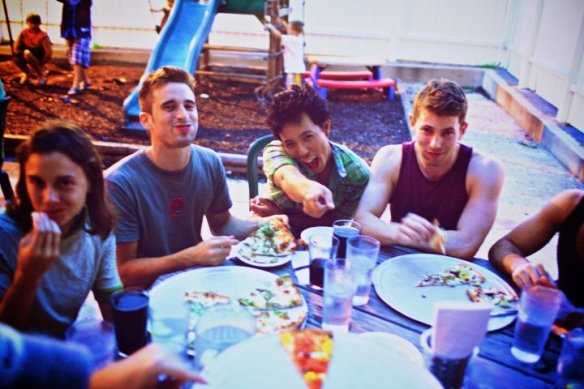 Raber, Rowland, Rio, and Connor, near the Pies and Pints playground

On to Part 2, which includes drag climbing at Kaymoor.